So, I’m a little late; because technically, Easter proper (or Easter week) ended three Sundays ago — we’re in the 4th week of Easter, in case anyone was counting. But then again, technically, we still have a few more Sundays of Easter-tide before Pentecost, no?
Since you last heard from me on Holy Thursday, I was forced to buy a brand new iPad 2 — I dropped mine and broke its gawd-awfully impractical glass screen in four different places, only to be told by the local evangelists that they don’t replace broken iPad screens, just in case anyone was wondering — only to have the latest iOS 5.1 update brick it. To add insult to the injury, iTunes INSISTED on re-downloading the entire update before it allowed me to restore Lambda2.1 — what I call my iPad 2, again if anyone was wondering — PLUS, my carrier’s arrested development kept throttling my speed in the region of 90 kBps — not very funny considering it’s a 750+ MB file — a speed of which should have be made illegal after the death of dial-up! <– Only in Malaysia, people! After a week of dancing with such abysmal broadband speeds, I had to resort to travelling down to Kiaseeland to download the confounded file via my Singaporean hotel’s in-house internet service; and no, it wasn’t on the house. Even so, I still needed to re-restore Lambda’s original settings — a grand total of five times, usually in the middle of in these wee hours — because the new update & him were yet to become good friends.
It’s all good now, though: I threatened to can him for the New iPad and all was restored in iOS-Land. I still traded up with the New iPad though, and The Baba gets a brand new iPad 2. It was a win-win situation. *glee* Back to the belated Easter greeting…

For reasons unknown, I have been thinking of olives since Easter — or Holy Week, to be more exact.
Spilt over a sub, or sprinkled generously across a pizza, they are the closest that one can get to pickled culinary perfection.

How convenient then, that I happen to have an olive tree in my garden! 🙂 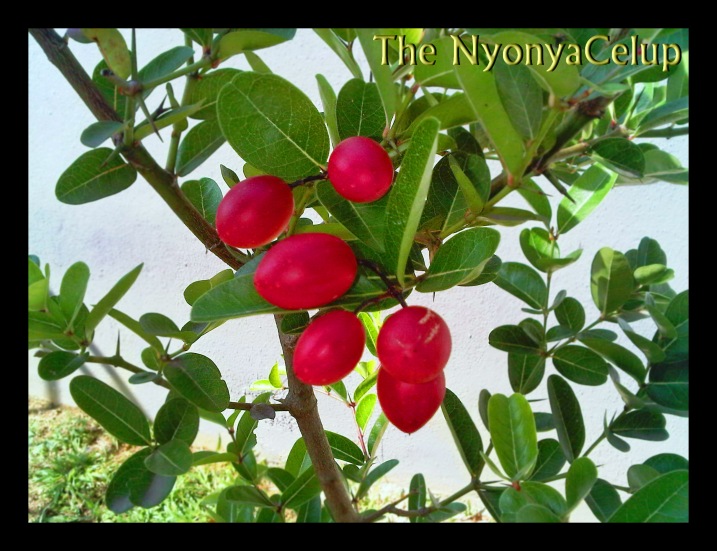 Not exactly black, but definitely not green either!
Don't ask me what kind of olives these are.
Finding them in Malaysia was a miracle to begin with.

How inconvenient though, that olives picked fresh from an olive tree are packed with oleuropein; a chemical compound that gives fresh olives, leaves, and (to an extent) extra virgin olive oil, an unforgettably bitter taste.
And although preparations of this compound are supposed to strengthen one’s immune system / stop ageing / reduce blood pressure and cholesterol, I’m not about to spoil my images of pickly heaven just about yet.

I was, however, able to Google an exhaustive manual on home curing methods for olives.
So I thought to myself: What the heck, why put such serendipity to waste? According to the very scholarly-sounding paper, there are five methods in which a home olive enthusiast can prepare her (or his, if you must insist) olives:

I must admit though, I should have waited a couple more weeks till I had nice black olives;
so just between you and me, let's call this a test drive. 😉

For the purposes of this food experiment, I will brine-cure my olives Greek-style.

Stop here if you intend to dehydrate your olives to death.

This is how we roll (or swim) in Greece.

Now, there are some warnings about mould growing on the surface of the brine (it is apparently quite common), and the best way to prevent this is to make sure your containers are airtight, and to keep them in a cool, dark place.
(Understand now the emphasis?)

There was also a note on botulism poisoning — WHICH IS, MORE OFTEN THAN NOT, FATAL — in the case of eating contaminated lye-cured olives.
But to be sure, I’d throw out any mouldy / soft / bad-smelling olives and sterilise (or throw out) the holding containers.

* Thanks to the University of California’s Division of Agriculture and Natural Resources’ Olives: Safe Methods for Home Pickling (2007)

** Also, The NyonyaCelup does not pretend to be an expert in matters pertaining to pickling. Readers are advised to do your own research, with reliable sources, and come to your own informed mature conclusions regarding safe methods for home preservation of food.