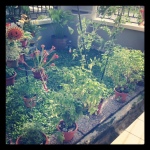 We take a break from failed macarons today to introduce The Zen Garden.
Yes, the NyonyaCelup — as well as her entire family — is unhealthily addicted to Plants vs. Zombies.

Circa early May 2012, half of The Zen Garden looked like this…

END_OF_DOCUMENT_TOKEN_TO_BE_REPLACED

So, I’m a little late; because technically, Easter proper (or Easter week) ended three Sundays ago — we’re in the 4th week of Easter, in case anyone was counting. But then again, technically, we still have a few more Sundays of Easter-tide before Pentecost, no?
Since you last heard from me on Holy Thursday, I was forced to buy a brand new iPad 2 — I dropped mine and broke its gawd-awfully impractical glass screen in four different places, only to be told by the local evangelists that they don’t replace broken iPad screens, just in case anyone was wondering — only to have the latest iOS 5.1 update brick it. To add insult to the injury, iTunes INSISTED on re-downloading the entire update before it allowed me to restore Lambda2.1 — what I call my iPad 2, again if anyone was wondering — PLUS, my carrier’s arrested development kept throttling my speed in the region of 90 kBps — not very funny considering it’s a 750+ MB file — a speed of which should have be made illegal after the death of dial-up! <– Only in Malaysia, people! After a week of dancing with such abysmal broadband speeds, I had to resort to travelling down to Kiaseeland to download the confounded file via my Singaporean hotel’s in-house internet service; and no, it wasn’t on the house. Even so, I still needed to re-restore Lambda’s original settings — a grand total of five times, usually in the middle of in these wee hours — because the new update & him were yet to become good friends.
It’s all good now, though: I threatened to can him for the New iPad and all was restored in iOS-Land. I still traded up with the New iPad though, and The Baba gets a brand new iPad 2. It was a win-win situation. *glee* Back to the belated Easter greeting…

For reasons unknown, I have been thinking of olives since Easter — or Holy Week, to be more exact.
Spilt over a sub, or sprinkled generously across a pizza, they are the closest that one can get to pickled culinary perfection.

How convenient then, that I happen to have an olive tree in my garden! 🙂

END_OF_DOCUMENT_TOKEN_TO_BE_REPLACED

The Miniature Killer has been up to more gardening today,
while the NyonyaCelup puts her finishing touches to her next post.

I wonder if I'd fit into that apron...

The Miniature Killer is back!

And this time she’s bringing a trellis with her!

Every vine needs a big strong trellis to climb onto...

A brief distraction for all of you while I work on the buah keluak recipe post.
It is truly taking longer than I expected. 3 days to be exact. 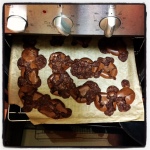